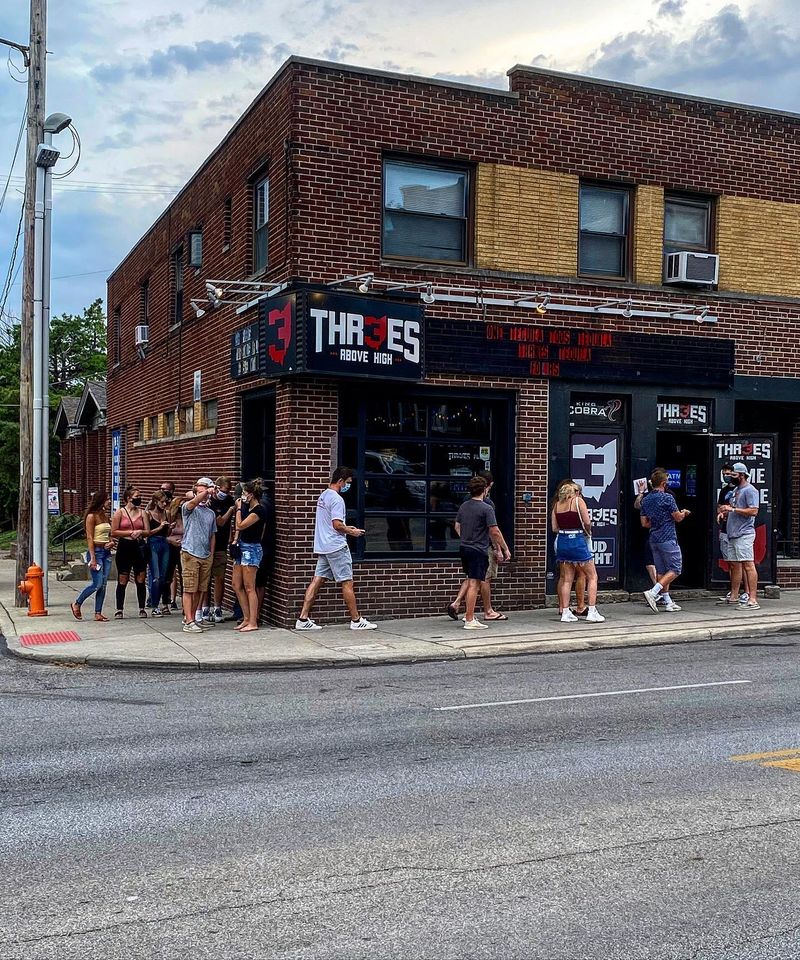 Ohio restaurants and bars have been hit hard by COVID-19. After months of shut-downs and restrictions to prevent the spread of the disease, and government assistance that is proving inadequate, the Big Ten athletic conference’s postponement of its fall season may prove to be the final straw for sports bars.

On Aug. 11, the Big Ten announced the postponement of all fall sports. There have been multiple reports that the league is aiming for a return to play in late December or early January, but nothing is certain, and bar owners aren’t holding their collective breaths.

For Scott Ellsworth, owner of campus-area bar Threes Above High, the decision didn’t come as a shock. He said he saw the writing on the wall, and he and his staff spent the weeks leading up to the decision mentally preparing for an impossible situation.

The bar does three times its normal business on Ohio State’s football game days–revenue Ellsworth relies on all year. The impact is multiplied by current statewide restrictions requiring bars to cut off alcohol sales at 10 p.m. Ellsworth said about 80% of sales typically happen between 10 p.m. and 2 a.m. And game days are a daytime attraction for students that have suddenly disappeared.

Threes isn’t the only bar feeling the compounding pressure of restrictions. The Ohio Restaurant association recently released the results of a survey that indicates 54% of restaurant and bar owners don’t think they will be able to stay in business under another nine months at the currently-allowed capacity.

“Entrepreneurs are very driven people. They just don’t see failure as an option. So when they’re saying they don’t think they can last nine months, they really mean it,” said Homa Moheimani, manager of media and communications for the ORA.

It’s unknown at this point what, if anything, will replace the draw of Buckeye football for bars and restaurants looking to bring in daytime customers. However, there are still some options for sports fans. The SEC, ACC, and Big 12 are currently scheduled to kick off their seasons. The NFL has discussed playing more on Saturdays. The NHL and NHLPA are negotiating the details of a 2020-21 season. Major League Soccer continues to play, and the NBA postseason is rolling along.

The fall football season also represented the hope of making up for financial losses before winter hits–closing down patios with it–which has been an essential way for restaurants to increase capacity while maintaining distancing restrictions.

The ORA has been advocating relentlessly for restaurants and bars in Ohio. The association was involved in the discussions that led the state to allow to-go cocktails. Still, owners like Ellsworth need more if they are going to stay afloat.

“It’s absolutely ridiculous that one section of one industry is being blamed and scapegoated for everything else,” said Ellsworth. “And this is the geniuses at city hall and the statehouse, that’s their fix?”

Ellsworth said his bar has been following restrictions to the letter, and college students are finally beginning to catch on. Still, he thinks these half measures do little to slow the spread of the virus, especially as students flock to house parties after his bar’s early closing.

In Ellsworth’s view, the government should shutter bars entirely if it is really concerned, but it must provide them with assistance. He sees the current measures as a way for the state to inflate employment numbers while still appearing to value public health.

With cases on the rise at many universities, it’s possible that campus-area establishments could lose their customer base entirely if students get sent home. It’s a reality that Ellsworth doesn’t think it is healthy to consider.

“That’s not something that we’re planning on not happening,” he said. “That would be do or die for a lot of businesses on campus. I know that for sure.”

Moheimani and Ellsworth both encourage would-be game day customers to still go out and support local establishments. Threes will attempt to recreate the atmosphere with live music, game day specials, and Ohio State gear. However, Ellsworth thinks the only real solution to his predicament will be action from the federal, state, and local governments.

“The one good thing that’s coming out of this is people are really starting to see the cracks in our system,” he said. “I think a lot of things are gonna change. At least I hope.”

With the Big Ten’s decision to reinstate fall football starting Oct. 24, some campus bars are breathing a sigh of relief, while…
Read More
X